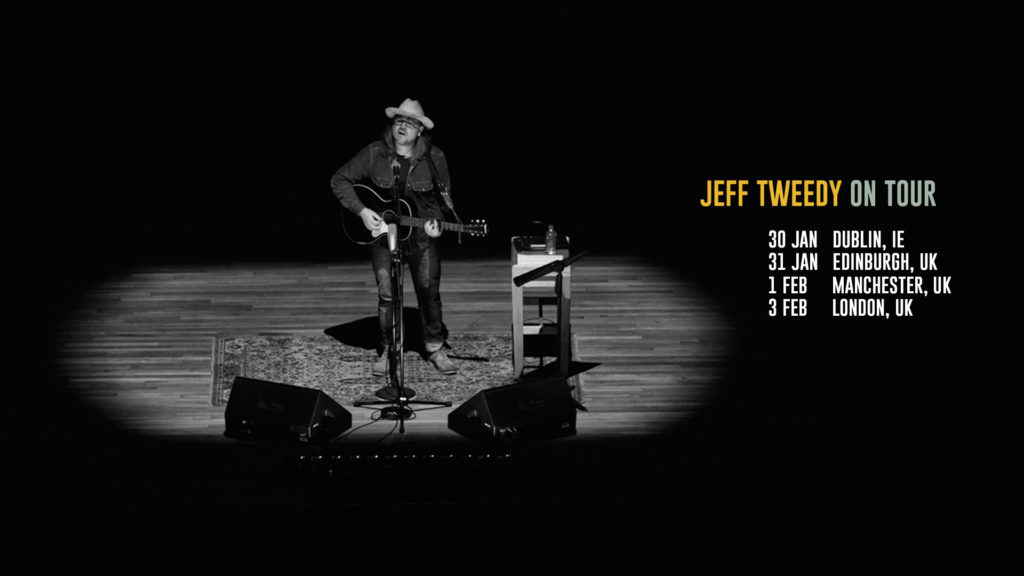 Jeff Tweedy elaborates duly when someone from the audience hollers: “What’s with the long hair, Jeff?”. Basically the Wilco front man and tonight solo performer has not cut it since the US election. He finds it highly uncomfortable, in fact he hates having long hair. But seeing that so many people suffer in the US in the current situation and Jeff Tweedy regards himself as privileged, the least he could do was trying to find a way to feel uncomfortable too. This exchange took place on the evening of the following event: Jeff Tweedy & James Elkington, Vicar Street, Dublin, Jan 30th!

Now, I am pretty sure that Jeff Tweedy was being his usual humble self about his annoying long hair being the only contribution in view of the current political climate of the US, but it is too good an introduction to this post to miss.

Yes, I feel privileged in my life as well but have been under a lot of mental pressure up to burn-out lately, so I had myself a wee present. Although the time off was shortish and it really drove me almost insane to find time for it in the first place, a couple of days off just by myself, in Dublin, and taking in some music was a big treat.

So I tried to remember what I used to do all those years back in Dublin and indulged in doing that again. Bookshops, record shops, vintage shops, loads of walking about to old haunts, people watching, meeting people again. Same me, same Dublin, really in a nutshell and it made me very happy. (Okay, forget the old shock when catching my face in a shop window – wow, has it been that long ago that I did this?)

But you don’t want to read about this (even though, I still warmly recommend Dublin for a lot of things aside from the usual – entry point to Ireland, shamrocks and stag and hen parties: The mountains, the sea, the suburbs, the museums, the sheer poetry in people’s conversations, a mug of tea, a pint of this and that…).

Won’t torment you any longer. So, Vicar Street it is. My first time there and it seems a great and lively venue. I am pleasantly surprised that tonight’s concert is seating only and my feet will be forever thankful. Must say though, I am pretty sure though that I had clicked the front area rather than the block to the side when choosing the ticket. After all, I was worrying for ages that I might block everyone’s view being tall and on moderate heels…

Convivial and listing great acts, Vicar Street for me though features a bit of a problem with that seating idea. Comfy as it is and suitable for quieter acts definitely, it should mean, stay bloody well seated, which of course most people don’t adhere to – so for every drink and every visit to the loo and what not, the whole row of seats has to get up, and people keep swarming by in front of you and clambering through the seats.

The support act possibly gets the worst of it. Not only half the audience did not bother to turn up for the support act, James Elkington. There was incessant moving and talking, even from the door staff (of course one girl in particular told her life story in a grating voice, sorry, yeah, you, has to be said). James Elkington seemed to be blissfully unaware of this, found  the audience eerily quiet and would prefer to be talked over as much as possible.

No need for that though. James Elkington has been shying the limelight since his days as front man of The Zincs – since then he has been collaborating with and contributing to a gazillion bands and artists of many genres, Steve Gunn, Richard Thompson, Eleventh Dream Day, Laetitia Sadier, Joan Shelley to name but a few. Eventually though with a bit of pressure of Steve Gunn (good man, yourself!, James Elkington released his solo album “Wintres Woma” last summer via Paradise of Bachelors and what a wondrous treat it is.

Tonight he performs most of the songs of the album and impresses everyone with his truly amazing guitar mastery. Personally I am relieved that a performance that I saw online where James’ voice went a bit all over the place was an exception or done under unfavourable circumstances because his voice is  now pitchperfect and accompanies the songs that if not intentionally but certainly subconsciously so, draw on a well of traditions including his native English folk music wonderfully.

A short break (and this time people are turfed out of the bar into the venue for Jeff Tweedy’s arrival) and then I do not know what hit me. A roaring reception for Jeff Tweedy who unceremoniously in Stetson and jacket walks on stage and starts to play. I have never had the chance to see Wilco live, so I cannot compare but to me the songs of Jeff Tweedy’s solo album “Together At Last” in their stripped down simplicity are very magic, and live on stage – wheyhey….That acoustic guitar is not even plugged in. There is Jeff, there are two microphones and the guitar. But man, the songs (a great selection from all over the Wilco catalogue plus some Loose Fur and Uncle Tupelo oeuvres) do not lack anything at all. To me Jeff Tweedy has one of the finest voices in contemporary music that can express anything (mostly it is of course of a more melancholic nature).

Neither did I expect to be bent over double, my sides splitting with laughter about Jeff’s deadpan banter between the songs. Sorry for the people behind me who were clearly filming and now have my howling laughter in the videos…Back to songs and there were still tears enough for those fragile songs that pull on every heart- and soul string that you might possess. A singalong, a long show, a truly satisfying one and too right we are all getting up at the end to salute Jeff Tweedy.

Thank you, best ever!

Note: Jeff Tweedy announced more solo concerts in the US and later in the year in Europe! www.wilcoworld.net

I Am Trying To Break Your Heart

Don’t Forget We All Think About Dying

I’m The Man Who Loves You

A Shot In The Arm

The “beast from the east” is blowing but that should be no excuse not to venture outside and enjoy the beautiful winter weather for me but alas as I was reading in my favourite armchair, my body was reclaiming lost sleep. The least I

Wishing you all happy holidays here from the Offbeat hub, hope you are having a great time! Not happy with your presents? Needing some light in those dark winter days? Some incentive for the new year to come? I might just have the cure