On Offbeat’s turntable in January you’ll find a bit of everything. What the songs have in common is that they provide heart and soul with much needed warmth. Offbeat Music Blog introduces new releases to you: The Trouble With Templeton, Richard Osborn & New Apostles.

The trouble with The Trouble With Templeton‘s release “Someday, Buddy” (Bella Union) was that it was released pre-Christmas during the usual end of year lull. So it went by unnoticed by some which is why I would really, really like to bring the album to your attention again.

Thomas Calder from Brisbane loves a melancholic song and still does on “Someday, Buddy”. Some people see no development from his band The Trouble With Templeton’s debut “Rookie”, especially in the sadness stakes. I do see a development in the songwriting capacity to a self-confident joining of different genres. Moreover, melancholic as the songs on “Someday, Buddy” may seem, they exude exceptional warmth.

Somewhere between post-rock, gloomy indie pop and slacker, The Trouble With Templeton manage to instill a glow in their songs that will have you listening to the album again and again, preferably in the late hours of the day.

Another trouble with The Trouble With Templeton would be their web presence…their website link is clearly leading somewhere else. Their Facebook is bit outdated. Same goes for the music sites. Hey, so you will have just to get that album and you won’t regret it.  Here is a wee taster for you. My personal favourite is the elegiac “Double Life” but here is “Vernon” that nicely represents a lot of angles on their music.

For all you fans of the fingerpicking guitar style (American primitive music in particular) and songs evoking whole movies, listen up: Richard Osborn! Not a name you are familiar with? Despite Richard Osborn having been around playing guitar since the 1960s?

Small wonder, if you look at his story. Richard Osborn was impressed by John Fahey’s style in 1965 and in 1968, Richard became a student of Robbie Basho, not surprising considering his interest in Indian music. Robbie Basho regards Richard as “technically better than me or Fahey”.

BUT THEN Richard Osborn suffered two accidents in 1980 which left him unable to play guitar for fifteen years. Only in 1995 he returned to playing guitar but did not have the strength for steel strings. Finally though, steel strings and the raga style were possible again for Rich, so at last he released an improvisational album in 2012, followed by his participation in a compilation “Beyond Berkely Guitar” (Tompkins Square), another self release and now, as a fantastic start into the new year: “Endless” (Tompkins Square)

“Endless” will impress you with all but one instrumental folk songs presented in an immaculate classical style for the most part. The masterpieces for me are however those where Rich Osborn introduces the raga style into his songs which adds a floating, dreamlike quality apart from incredible technical ability.

New Apostles first appeared in 1980 and you can still hear the heritage of the time in their music, albeit brought forward musically, lyrically and personally to the now. After 18 years the band broke up and supposedly no-one believed in their comeback after a couple of years. Another 18 years and they are back, full whack, though and have been releasing an abundance of songs that they write and record in the true punk spirit: Quick.

Based on the band’s age, their experience as musicians and many musical influences and also other cultural inputs, these songs are far from thin and superficial: Out come fully formed songs. It feels like they opened the tap and the water just barges out, having been stored up for so long. To high critical acclaim New Apostles have so far in their second coming released three albums: West Bank, Apparatchiks and Collateral Damage.

New Apostles’ music, if you want tags, would be somewhere between post-punk, psych and krautrock, also some electro finds its way into the mix. It is not all doom and gloom, the mixture comes across as a musically satisfying, lyrically thought-provoking but balanced result.

Friday, 27th of January 2017 will see the release of a brand-new album called “Recurring Dream”. A taster you can enjoy below. “Recurring Dream” will be available as CD and digital download.

From what I have heard and can vividly imagine, New Apostles are well worth seeing live, so don’t miss New Apostles from Nottingham/UK.

Is this blog hibernating? Not at all (too many cups of tea). The author of the blog is patiently waiting for spring in the northern hemisphere. In the world of music spring has already come – tours being announced, new releases galore and the festival 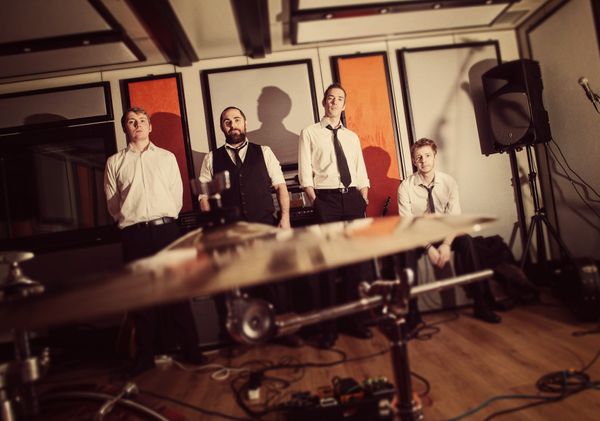 Happy New Year to you all! I know – what is it but a fracture of time that divides the new from the old in some parts of the world only.