What is going on? I will arrive later in Maastricht, Netherlands, than the band itself, Timber Timbre, who have travelled all the way from Switzerland…Holiday traffic jams, roadworks galore and then a city thronging with people and coaches from all over Europe. Ah, the city’s greatest son, André Rieu is playing his hometown in a beautiful old open air setting slap bang in the middle of the city. Masses of fans queue up and populate every, and I mean every, restaurant and cafe in town. Will there be still people attending Timber Timbre at the Muziekgieterij tonight? I am not insinuating that the fans share a musical taste here but that visitors might simply not get into town…But they do, many of them, and they are being well rewarded with a great final gig before the venue’s summer lull. Here we go:Timber Timbre at Muziekgieterij, Maastricht – an interview. 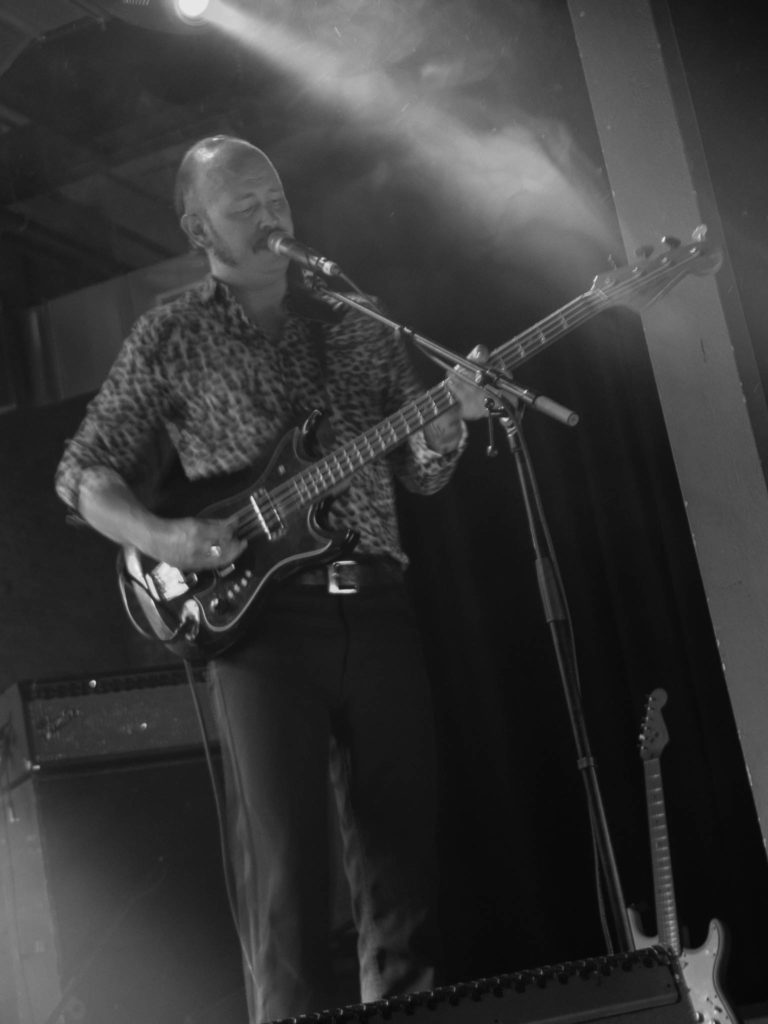 Timber Timbre play songs from all albums, neatly interject the new “Sincerely, Future Pollution” album and do so with a dark, hypnotic and yet danceable vibe. Encores galore, a very friendly band, what more do you want. It is however very dark, suits the music, suits Taylor Kirk, but does not suit the camera so much…

Earlier in the afternoon, a tired Taylor Kirk enters the venue from the tour coach and kindly chats to Offbeat Music Blog. A quiet, pensive, well-spoken man who strikes me as very modest and friendly with a good sense of humour.

At this point, I would like to thank Ingrid Huhn at City Slang and Yann Dupuis, tour manager, for making it possible and as always the great crew at the Muziekgieterij, the appreciative audience of this venue and of course Timber Timbre for the great performance. And now we chat: 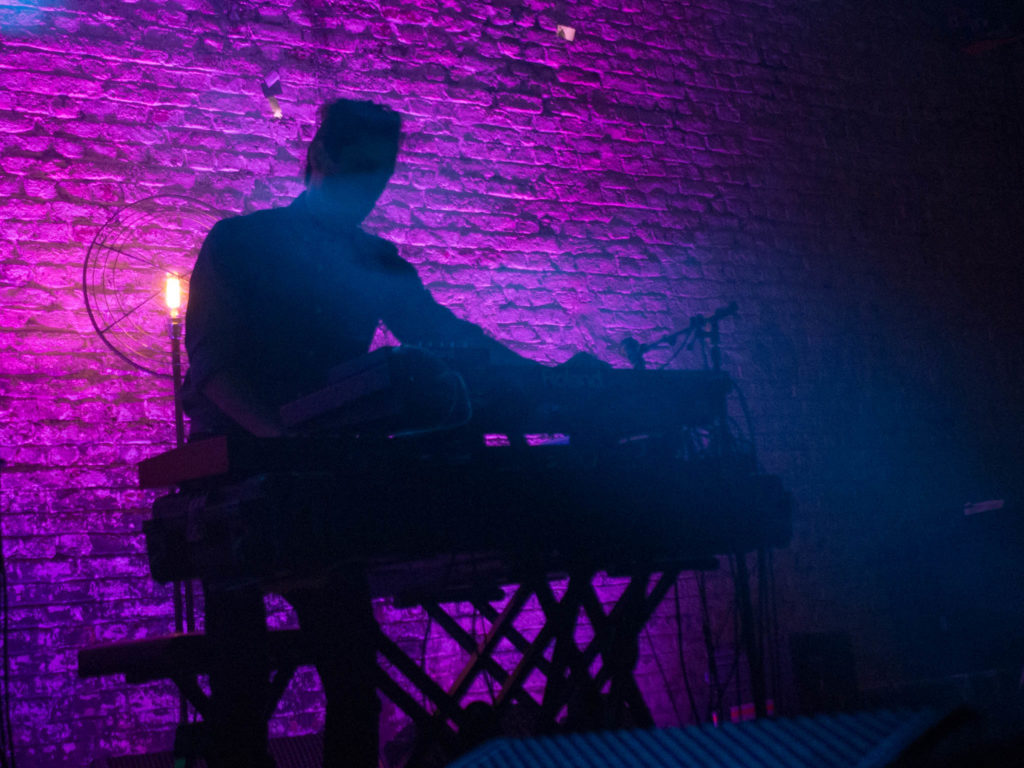 Offbeat Music Blog: Thank you very much, Taylor, for taking the time for this interview on your rather strenuous tour!

OMB: Has there been a defining moment in your life where you decided, music is something I want to do and totally immerse myself in it and create?

Taylor Kirk: I can remember as a kid seeing another kid, a couple of years older than me: He was playing guitar at a friend’s place. He was playing “Heart Shaped Box” by Nirvana. This really captured my imagination and I understood that I needed to be able to do that. That was the only real kind of moment. From that point on it was just something that needed to be done at some level.

OMB: How old were you there?

Taylor Kirk: I think I was maybe twelve or thirteen.

OMB: And did you come from a musical family?

Taylor Kirk: Yeah, my Dad is actually a drummer. We used to actually play together when I learned to play guitar. We would jam.

OMB: You joined bands before Timber Timbre. Were they in the same kind of genre?

Taylor Kirk: I suppose, yeah. I was mostly playing drums before this project in other people’s friends’ bands, kind of, yeah, rock’n roll music.

OMB: When you look back at Timber Timbre and the bands before that, do you see a straight line in your development, in your songwriting?

Taylor Kirk: Yeah, to me it is quite linear. It changes a certain way. I can track where it’s come from and how it’s changed. I observed that. And also, you know, part of that is intentional and deliberate, and part is also subconscious and a result of learning.

OMB: When you sit down to write a song, do you think about the perception they might receive or is that at the back of your mind and you write them for yourself?

Taylor Kirk: I remember when I began making recordings, writing songs, that it was really just for me – it was for my own kind of catharsis or pleasure. Now, as I go along, I notice more and more that the thing is kind of infected by this concern that it has another purpose, that it is not just meant for me. I always try and put that away but it is there. It is too bad. I wish I could somehow undo that. I don’t know what that would mean to reverse that kind of idea or that factor, you know.

OMB: You recorded your new album “Sincerely Future Pollution” in France in a studio that was full of old, mainly electronic, instruments and you made use of them in a big way. But did you already have in mind before that to change direction a little bit?

Taylor Kirk: Oh yes! The idea was that we would make something that was decidedly electronic and maybe even sort of uptempo or danceable. Something more kind of fun. There was a curiosity about doing something different. It didn’t really go as planned but we did end up embracing this different instrumentation. It is not hugely different but I guess it is just the era of the synthesisers we were using.

OMB: For me it is not so different. There is some new additions but it is still Timber Timbre.

Taylor Kirk: For some it was a big deal.

OMB: For some it was a HUGE deal to the point that they claimed this is not Timber Timbre anymore. How did you deal with that?

Taylor Kirk: I dunno. That was kind of the initial reaction when we started to share the recording with friends and contemporaries and they found it to be…well, it was weird to them and somehow unfamiliar. So that got me a little bit concerned at the time. I never found that it was that unusual.

OMB: Maybe people see Timber Timbre from a different angle sometimes than yourself?

Taylor Kirk: Could be, yeah!

OMB: When you write songs, you do this on your own, I presume and then go into the studio. Do your band colleagues find it difficult, those not being their own songs, to add to them?

Taylor Kirk: No, it seems, as we’ve gone along, they have insinuated themselves more into the thing and made themselves indispensable. To the show but also to the recording process and to the composing as well and arranging. This time around we spent a lot of time together, evolving the songs, the three of us, Mathieu and Simon and myself. Olivier, our former drummer – he was also very involved with sounds and he played quite a lot on the album as well….Did I lose track there?

OMB: No, not at all, you are right on track (laughter). What did you have in mind other than from the musical perspective, from the lyrical and atmospheric side, when you started out doing the album?

Taylor Kirk: All these kind of notes and observations I collected, textural kind of references – all of them were kind of revolving around this science fiction ideas of dystopic realities. I started to consider that we were now living in one of these science fiction worlds that had been written about in the past, had this idea that we had arrived in the future.

OMB: Do you mean the power or the digitalisation?

Taylor Kirk: Yes, that but also the ephemeral nature of how things are disposable and how fast things are moving now.

OMB: You live in Montreal, Canada. Canada is becoming really popular right now, back on the map when we talk about “America”, isn’t it? You are lucky to live there.

Taylor Kirk: Yes, I guess so.

OMB: From the feel of your older recordings and knowing you write in solitude, one would assume you live in the countryside, but Montreal is a pretty big place, isn’t it?

OMB: If, like you said, tend to write “in a bubble”, how do you find touring? You have one stressful tour here at the moment.

Taylor Kirk: It’s fun. I really really used to hate it. I really preferred to be at home but somehow I have adjusted and I have come to like it and need it. It’s weird. It has been very different now with this group. It’s become a lot more fun to do it with this group of people. To play in this kind of traditional format of a rock group is much more satisfying, I think. People know what this is and they respond to it. As opposed to what we were doing years ago. It was really difficult.

OMB: With the audience?

Taylor Kirk: Yeah, to win people over in the format that we were approaching it with before.

OMB: And now you get a good feedback?

Taylor Kirk: Yeah, it doesn’t require the same level of patience and attention. It is a bit more like (snaps fingers).

OMB: With the more complex nature of the instrumentation on your new album, are the songs more difficult to take to a stage?

Taylor Kirk: It is only really now that we had to pay attention to honour what we have done with the recordings with the live show. It is still a bit bigger and heavier but we have never been overly concerned about that. This time we weren’t really able to do other arrangements because of the nuanced things. Everything needed to be there.

OMB: So it was a bit like jumping into cold water then. But it worked out fine?

Taylor Kirk: Oh yeah, yeah! There was a big concern also that the new music wasn’t going to fit with the older repertoire but it’s all good.

OMB: Which song on the new album “Sincerely Future Pollution” best exemplifies the spirit of the album?

Taylor Kirk: The one that I was really the most proud of was “Sincerely Future Pollution”, the song. Because we really realised it as a group. That was probably the first time that something had been created organically between all of us together. It is quite anonymous on the recording but that’s the one for me.

Taylor Kirk: Oh yeah! I mean there are lots of songs that we never played because we just never were able to make them compelling in a live setting. And certainly there is older music that we have played for so long that it needs to be put away for a little while. Yeah, I dunno, I think everything from the catalogue is still cool, is still relevant. But maybe the first two recordings, “Cedar Shakes” and “Medicinals” – these were home recordings I did on my own. These are much more rooted in blues music and folk music. It would be tricky to find a place for a lot of these songs.

OMB: Is there any question where you would think – sitting at home and thinking about doing an interview – “I would really like to be asked that”?

Taylor Kirk: (Laughs out loud). I never ever think about that. I am not a good interviewee. I get really nervous about these kind of situations.

OMB: Well, this is not television and something big! So, nothing comes to mind?

Taylor Kirk: No, nothing in particular (laughs).

OMB: Thank you very much, Taylor!

Taylor Kirk: Thank you for the opportunity!

A couple of shortish notes coming up on music you might want to spice up the summer lull with or for any other time of course, too. This first post is on a couple of new labels – or let’s say, labels that you 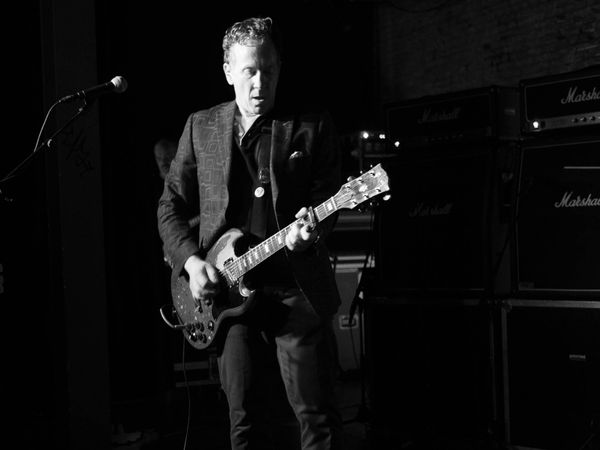 Do you get this feeling too? You have listened to a certain album so many times that the first little sound of just one song off it, makes your mind